Second national awards shortlisting for the company within the past month

Scottish business The Power Within Training and Development has been named as a finalist in the UK-wide 2021 Growing Business Awards.

The company – run by couple James and Enas Fleming – is in the running for the Micro Business of the Year title at the London awards ceremony in November.

This is the second national shortlisting for the business in the past month after James and Enas were also named as finalists for the Family Business Entrepreneur Award at the prestigious GB Entrepreneur Awards which also takes place later this year.

The Power Within Training & Development helps people and businesses excel by improving their motivation, self-belief, decision making and leadership through a ground-breaking approach called Motivational Intelligence.

The business was founded by married couple James and Enas in 2017 after they returned home from years of working abroad in corporate careers, to start their own business helping others thrive in business and in life.

The pandemic threatened to derail their plans for success…….but James and Enas used it as an opportunity to pivot their business, spot new opportunities and increase their revenue significantly over the past year.

As a result, they’ve grown their small team to six employees and have recently launched both our Business Growth Academy and our Leading With Motivational Intelligence Executive Diploma aimed specifically at the construction industry which is fully funded through the Construction Industry Training Board (CITB) as an ATO.

“We’re over the moon to be recognised as one of the UK’s top growing businesses and really looking forward to the awards event later this year.

The business operates from the company’s base in Bellshill and delivers its training across Scotland and the UK, as well as the US and the Middle East Region.

If you’d like to know more about the revolutionary Motivational Intelligence (MQ) success system we use, and that we have shared with many others to help them achieve their dreams, then let’s have a free call to see how we can do the same for you. 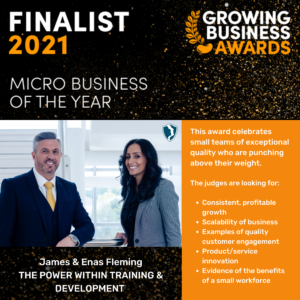